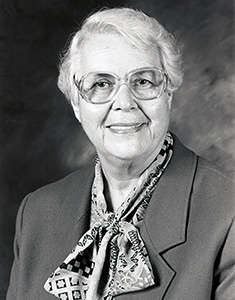 Catherine Heniford Lewis, head librarian for the Horry County Memorial Library for 27 years, established the first library for Coastal Carolina Junior College in 1959 and served as the institution's first librarian.

She authored numerous articles on Horry County history that were published in various local and state publications including the Independent Republic Quarterly. In addition, she was a lecturer on Horry County for the continuing education program at Coastal Carolina, chairman of the board for Playcard Environmental Education Center, member of the board of directors for the Pee Dee Heritage Center, and member of the Southeastern South Carolina and Waccamaw library associations.

Among her many honors, Lewis received the South Carolina State Library Distinguished Service Award in 1987, the Community Award of Merit from Coastal Carolina College in 1984, the Ernest Edward Richardson Award for service to the Horry County Historical Society in 1981, the Field and Herald Woman of the Year in 1973 and 1982, and the Coastal Educational Foundation award for meritorious service in 1967. She became the first Wayne S. Yenawine Lecturer at the University of South Carolina in 1986. Lewis was named an honorary founder of Coastal Carolina University in 1990.

Lewis was awarded the honorary degree Doctor of Humane Letters from Coastal Carolina University during the May 1995 commencement ceremony.