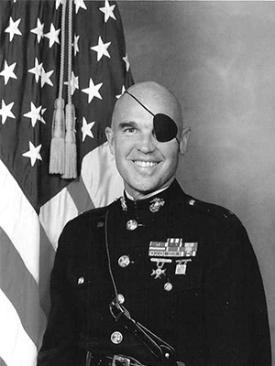 Marine Corps veteran 1st Lt. Patrick Cleburne "Clebe" McClary, grew up in the South Carolina lowcountry. After completing Officers Training School in Quantico, Va. McClary became platoon leader of the 1st Recon Battalion in Vietnam. McClary suffered the loss of his left arm and left eye on his 19th recon patrol. Since then he has told his story of courage, determination and strength to motivate audiences including the FBI, the New York Giants and the Atlanta Braves.

In his address to students, McClary stressed the importance of honoring commitments. "In this world of give and take, not enough people give what it takes," he said. He also encouraged the 2008 graduating class to set goals. "The only difference between a dream and a goal is that you put a date on a goal. Write them down and check them off. You've got to see yourself doing it or you'll never get it done."