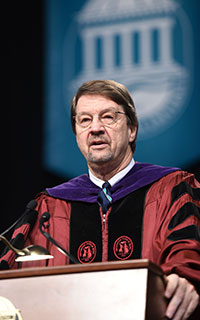 Longtime Coastal Carolina University professor and administrator Edgar L. “Eddie” Dyer was the speaker for the winter commencement held Saturday, December 13, 2014. Approximately 600 students were eligible to receive their degrees at the ceremony.

Dyer joined CCU’s political science faculty in 1976. In addition to his teaching duties, he has held many key administrative positions; he has served as CCU’s executive vice president and chief operating officer since 2007, and served as university counsel, vice president of university relations, executive director of the Coastal Educational Foundation, interim director of athletics, and interim dean of the Thomas W. and Robin W. College of Humanities and Fine Arts. During its May 2015 meeting, the university's Board of Trustees named Dyer special consultant to the president following his retirement in July 2015. Dyer also earned the title distinguished professor emeritus.

Addressing the graduates, Dyer said, "I have told people for almost four decades that my real education began when I came to Coastal Carolina to teach. So, practically speaking, I am an alumnus of this institution like you."

"It is often said that freedom comes from the truth," he continued. "The Holy Bible and other sacred works say as much. There are many ways to the truth, but the search is greatly aided by the enlightenment and raising of consciousness that follows formal education. This is expressed in the Latin motto of this institution: Ex libertate veritas – from freedom, the truth. The reverse is also true. Truth and its elevation of our spirit set us free and the search for truth is not possible without some semblance of formal education."

Dyer is the first recipient of the HTC Distinguished Teacher-Scholar Lecturer Award at CCU and has been named Professor of the Year. He is an honorary inductee of the CCU Athletic Hall of Fame and a faculty inductee of Omicron Delta Kappa.

In 2010, Dyer was presented the state's Palmetto Patriot Award for his service to the community. He has taken an active part in civic affairs, from serving as chairman the local Grass Roots Initiative for Planning and Progress in the 1990s to his current service on the Horry County Planning Commission. Dyer also serves as chairman of the RIDE III Committee, a group appointed by Horry County Council to prioritize roads projects for a pending 2016 RIDE III referendum. He serves on the board of Horry County United Way.

Dyer earned a bachelor's degree in political science from Guilford College, a master's degree in public administration from the University of South Carolina, and a juris doctor degree from the University of South Carolina. His published articles focus on such subjects as academic freedom, land use law, government and politics, and African American history.