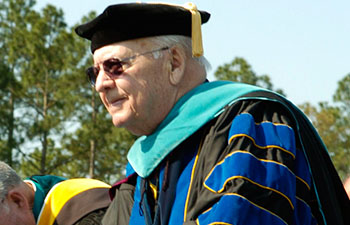 Edward Marion “Dick” Singleton served as director and later chancellor of USC Coastal Carolina College from 1963 until his retirement in 1983. Under his leadership, the institution began a period of dramatic growth and development; when his administration began, the two-year college had approximately 110 full-time students and when he retired, the college had more than 3,200 students and awarded baccalaureate degrees. The first campus building – the Edward M. Singleton Building – opened in September 1963.

Upon retirement in 1983, the Board of Trustees of the University of South Carolina named him chancellor emeritus. He served as senior consultant to the Coastal Carolina University administration during the institution’s transition from the USC System to its independence in 1993 and has continued in that role with two presidents of the University. He was a member of the Coastal Educational Foundation from 1986 to 1992, and later served as director emeritus.

A lifelong sports enthusiast, he led the Chanticleers to NAIA status, NCAA Division I membership, and he served as the first commissioner of the Big South Conference from 1983 to 1989. As commissioner, he directed the effort to establish women’s athletics in the conference, which began with five men’s programs and later added six women’s programs. In 1991 he was inducted into the Coastal Carolina University George F. “Buddy” Sasser Athletic Hall of Fame. In 2008 he became the first recipient of the Big South Conference Leadership Award, which is named in his honor.

Singleton was born October 9, 1922, in Bucksport, S.C. He attended Conway Grammar School and Conway High School, where he was president of his freshman, sophomore and junior classes and excelled in athletics. He served in the U.S. Army as a physical reconditioning instructor during World War II.

He was employed with the Conway Public School System from 1949 to 1962, as a teacher, coach, principal, and superintendent of the Conway City Schools. He was the founder and first supervisor of the Conway Recreation Department and coached the 1956 Conway American Legion state championship team that also won the championship among eight southeastern states. He was a devoted Boston Red Sox fan.

He was awarded the honorary degree Doctor of Public Service from Coastal Carolina University during the May 2005 commencement ceremony.