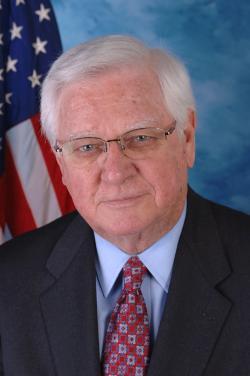 Harold "Hal" Rogers, who has represented the 5th Congressional District of Kentucky since 1981, is the longest serving Kentucky Republican ever elected to federal office.

He has served on the House Appropriations Committee for more than 30 years and has served on eight different subcommittees, including leadership roles as chairman or ranking member of three. In 2003 Rogers was tapped to lead the newly established Subcommittee on Homeland Security and he worked to support first responder training and equipment, disaster preparedness, and the enforcement of border and transportations system security. Rogers has been an important advocate for Interstate 73, helping to secure critical funding for the project.

Rogers was awarded the honorary degree Doctor of Public Service during a special ceremony at Coastal Carolina University on Sept. 10, 2011.