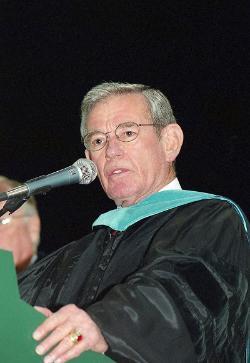 Hugh K. Leatherman Sr. has served in the South Carolina Senate since 1981. As a Senator, he has been a strong supporter of Coastal and has played an important role in securing state funding for the university. He is a member of the executive committee of the North Eastern Strategic Alliance (NESA), an organization which was created in 2000 to promote the joint development of the Pee Dee and Waccamaw regions of South Carolina.

A native of Florence, Leatherman is a managing partner of WyBoo Investments. He earned a bachelor's degree in civil engineering from N.C. State University. He has served as a member of the Quinby Town Council and as Mayor Pro Tem.

He has received honorary degrees from Francis Marion University, the Medical University of South Carolina and the College of Charleston.

Leatherman was awarded the honorary degree Doctor of Public Service from Coastal Carolina University during the December 2002 commencement ceremony.