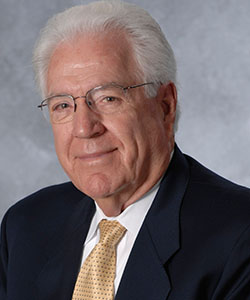 James Carson Benton Sr. (1932-2017), a Myrtle Beach native, graduated from Myrtle Beach High School in 1951 and attended Clemson University. He served in the U.S. Navy during the Korean War and was honorably discharged in 1955. Returning home, he began a career in the family construction business his father started in 1938, C.L. Benton & Sons Inc. The company has been instrumental in the growth of the Grand Strand, especially the rebuilding following the devastation of Hurricane Hugo. He retired from the business in 1999.

He served on the boards of Coastal Federal Bank, Dunes Golf and Beach Club, Coker College, Horry County Ecology Board and Anchor Bank. In addition to CCU, his philanthropy has benefited Clemson University, Coker College and Newberry College, as well as many local charities.

Benton was a recipient of the Ashby Ward Pioneer Award from the Myrtle Beach Chamber of Commerce. In 2008, he was awarded the Order of the Palmetto, the state's highest civilian award for service and contributions to the state of South Carolina.

Benton received the honorary degree Doctor of Public Service from Coastal Carolina University during the May 2007 commencement ceremony.