James P. Blanton, an original founder of Coastal Carolina University, was known and respected throughout the region and the state for his commitment to education and to the conservation of the natural resources of Horry County.

A member of the first committee that met in July 1954 to discuss establishing a junior college in Horry County, Blanton served Coastal Carolina University continuously through the years, and was a director emeritus of the Coastal Educational Foundation. He was a member of the Horry County Higher Education Commission from 1954 to 1965, and served as chairman and vice chairman.

As a member of the South Carolina House of Representatives in 1967 and 1968, Blanton was the chief author of legislation called Omnibus Law Bill, which established the first training center for law enforcement in the state, and he proposed the state's first ecology bill and focused attention on issues relating to soil conservation and forestry.

Born in 1915 in the Mount Olive section of Horry County, Blanton graduated from Floyds High School, but family responsibilities and economic hardships brought on by the Great Depression prevented him from pursuing a college degree. These experiences fueled his incentive to work to help provide better educational opportunities for others.

In 1987 Blanton founded the Playcard Environmental Education Center in concert with the Horry County Conservation Foundation, which Blanton also founded. Located on the edge of an 80-acre blackwater swamp 20 miles west of Conway, the facility provides experiential learning experiences related to the study of the natural sciences and conservation, classroom space, a conference center and nature trails. 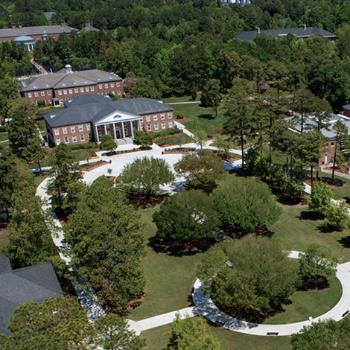 Blanton was awarded the honorary degree Doctor of Public Service from Coastal Carolina University during the December 2001 commencement ceremony.

Shortly before his death in September 2004, Coastal Carolina University's "horseshoe" was named James P. Blanton Circle. When the area was closed to traffic and further beautified in 2013, it became James P. Blanton Park.‌