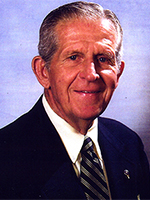 James F. Hackler Jr. was a major general in the United States Air Force, a pioneer of the Grand Strand’s golf industry, and longtime supporter of Coastal Carolina University.

Born in Marion, Va. in 1920, he earned a bachelor’s degree from the United States Military Academy at West Point in 1943 and attended the NATO Defense College and United States National War College in 1960. He served as a fighter pilot in World War II and was the first Operational Group Commander of the newly formed 354th Tactical Fighter Wing at the Myrtle Beach Air Force Base in 1956. His military decorations include the Silver Star, Legion of Merit, Distinguished Flying Cross and the French Croix de Guerre.

For many years he served as president and chairman of the board of Caro-Strand Corp., Possum Trot Inc., Indian Wells Golf Club and Heather Glen Inc. He was actively involved in civic affairs, serving as commissioner of the Horry County Airport Commission, chair of the Jetport Terminal Building Planning Committee, a member of the Board of Visitors for Coastal Carolina University's E. Craig Wall Sr. College of Business Administration and other organizations and committees.

He received the honorary degree Doctor of Public Service from Coastal Carolina University during the May 2007 commencement ceremony.