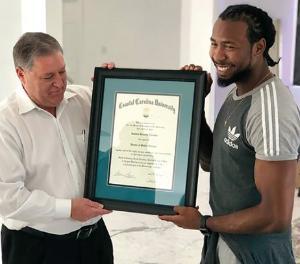 Joshua R. "Josh" Norman is a cornerback for the Washington Redskins of the National Football League. He played football at Coastal Carolina University from 2008-2011, joining the team as a walk-on.

Norman was drafted in the fifth round (143rd overall) of the 2012 NFL Draft by the Carolina Panthers, a team he helped lead to Super Bowl 50. He was also voted first team All-Pro and to the NFL Pro Bowl for the 2015 season. He joined the Redskins organization in 2016 as a free agent, signing a five-year contract.

Norman founded Starz24, a foundation that helps children through programs that emphasize fitness and teamwork.

He finished as runner-up in season 26 of the television show Dancing with the Stars in 2018. The former All-American was inducted into the George F. "Buddy" Sasser Hall of Fame at CCU in 2017.

Norman studied communication and dramatic arts at Coastal Carolina University. He is from Greenwood, S.C.

Norman was awarded the honorary degree Doctor of Public Service during a special presentation on June 6, 2018.

"The board of trustees and I wanted to recognize Josh for everything he's done for the underprivileged, for hurricane victims, for youth. He's been a wonderful humanitarian, and we felt it was an honor that we could bestow on him just to say thank you for what he is doing for the university, for the community and for this nation."
CCU President David A. DeCenzo

In 2018 Norman made a $1.5 million donation to Coastal Carolina University. The majority of his gift has been designated for the Brooks Stadium expansion project, which includes increasing seating capacity to at least 20,000, and adding luxury suites and an upper deck to the west side of the stadium. In recognition of his gift, the athletics field house at the stadium has been named the Marrio and Josh Norman Field House, after Josh and his brother, Marrio, who also played football for the Chanticleers.