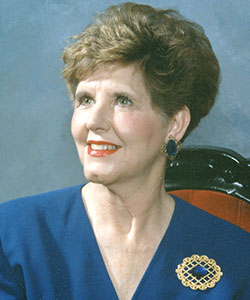 M. Lois Eargle of Conway, S.C. has served as Horry County Auditor since 1993.

Active in politics and civic affairs, Eargle served four terms in the South Carolina House of Representatives and was a member of the South Carolina Highway Commission. When she ran in 1976, she did so as first woman in Horry County to run for the state legislature. She served as president of the first Citizen’s Congress, appointed by the governor to recommend reform of the South Carolina judicial system. Eargle was appointed to the President’s Commission on Mental Retardation by President Reagan, a position she held throughout Reagan’s second term in office.

She is president of the South Carolina Association of Countywide Elected Executives and chairman emeritus of the Horry County Republican Party.

She received the honorary degree Doctor of Public Service from Coastal Carolina University during the December 2006 commencement ceremony.