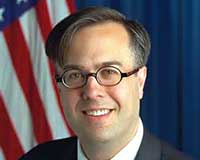 Since 2007, Michael J. Gerson has written a nationally syndicated column that appears twice weekly in the Washington Post and nearly 1,000 other newspapers. He is the author of Heroic Conservatism (2007) and co-author of City of Man: Religion and Politics in a New Era (2010). He serves on the board of directors of the U.S. Center for Global Leadership and of The News Literacy Project. Gerson is a senior adviser to ONE, a bipartisan organization dedicated to the fight against extreme poverty and preventable diseases, and co-chair of the World Economic Forum’s Global Agenda Council on Values. He appears regularly on the PBS NewsHour, Face the Nation and other news programs.

Until 2006, Gerson was a top aide to President George W. Bush as assistant to the president for policy and strategic planning. He was a key administration advocate for the President’s Emergency Plan for AIDS Relief (PEPFAR), the President’s Malaria Initiative (PMI), the fight against global sex trafficking, and funding for women’s justice and empowerment issues. Prior to that appointment, he served in the White House as deputy assistant to the president and director of presidential speechwriting and policy adviser. Gerson joined Bush’s presidential campaign in early 1999 as chief speechwriter and senior policy adviser. He was also a senior editor covering politics at U.S. News and World Report, a speechwriter and policy adviser for Jack Kemp, and a speechwriter for Bob Dole during the 1996 presidential campaign.

In his address to graduates, Gerson described his experiences as the Bush administration’s chief advocate and adviser for the President’s Emergency Plan for AIDS relief. He recounted stories of people he met while traveling through Sudan and Uganda who, despite their suffering, led lives of courage and purpose with “silent, uncelebrated grace.”

“Even our bleakest midnight moments can be used and transformed into a life of purpose,” said Gerson. “Altruism is a form of freedom, freedom from selfish wants. The things that make us most proud, in the end, are not what we gain but what we give.” He advised the graduates to “know who you are, be open to grace, and find the freedom to live lightly and generously.”

He is a graduate of Wheaton College in Illinois. Gerson grew up in the St. Louis area and lives with his wife and sons in northern Virginia.

Gerson received the honorary degree Doctor of Humane Letters from Coastal Carolina University during the May 2015 commencement ceremony.