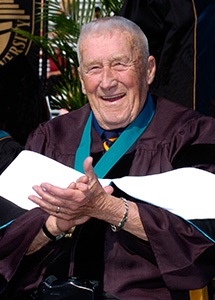 Mickey Spillane, an internationally famous crime/mystery author, enjoyed a diverse career that has included stints as a circus trampoline performer and a federal agent. Spillane has more than 25 novels to his credit, about half of those in the Mike Hammer private eye series, which he began in 1947.

Spillane told the graduates: "The man who says it can't be done is always interrupted by the man who did it." Spillane was recognized for a lifetime of literary achievement as one of the world's most popular mystery writers.

Spillane was awarded the honorary degree Doctor of Humane Letters from Coastal Carolina University during the May 2005 commencement ceremony.