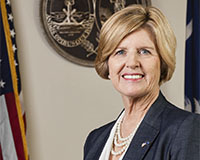 Molly M. Spearman was elected as the 18th South Carolina State Superintendent of Education on Nov. 4, 2014. From Saluda County, Spearman was a public school music teacher for 18 years and then served as an assistant principal. In 1993, she was elected to the S.C. House of Representatives where she served four terms. She was named Legislator of the Year by the Department of Health and Environmental Control (DHEC) and the American Legion. Prior to her election as superintendent, Spearman was deputy superintendent for six years, and for 10 years she was executive director of the South Carolina Association of School Administrators.

In her remarks to Coastal Carolina University’s fall graduation candidates, Spearman advised the Class of 2015 not to forget their roots as they go forward in their lives and careers.

“Your journey in life may never take you back there to live again,” said Spearman, “but you need to do what you can to support and uplift the people who have made you what you are today. Don’t forget them. So whether you become a teacher, a scientist, a CEO of a company, a health care professional – in later years when you are reminiscing, the relationships you had with the people along the way will be what matters the most.”

Spearman summarized the highlights of her career, from her rural upbringing near Saluda, S.C., her education at Lander College, her career as a public school music teacher and election to the S.C. House of Representatives, to her present position as superintendent of education.

“I’m blessed to have this moment, and I have a large responsibility,” she said. “And that is to reach a vision that when every student in South Carolina finishes high school that they are ready for success.” She encouraged the CCU graduates to work hard and set goals but not to be devastated if they don’t work out, “because there may be something better, that you had not imagined, in store for you.”