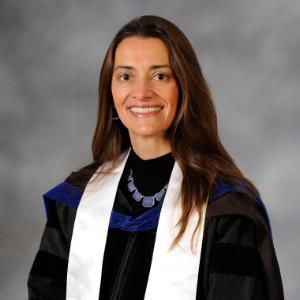 Pamela Martin, professor of politics and international relations at Coastal Carolina University, was the speaker for the August commencement held Saturday, Aug. 8, 2015. Approximately 300 students participated in the ceremony.

In her address, she viewed the new graduates' achievement from a global perspective. "Slightly under 7 percent of the world's population has the degree that you have earned today," she said. "Sixty percent of your fellow U.S. citizens do not have such a degree. Given these statistics, it is clear that you have something to celebrate today."

...it is clear that you have something to celebrate today.

Martin refuted some of the negative cultural characteristics that have been attributed to the graduates' generation. While some pundits contend that they are narcissistically obsessed with digital social media and that they “have no social skills, just screen skills," Martin said of millennials that "75 percent of you donate to charity... 71 percent of you raise money for charity, and 57 percent of you volunteer for one." Martin also related personal experiences of her students’ acts of charity, civility and self-sacrifice.

She encouraged the graduates to apply their knowledge and skills to improve the world via the powerful opportunities that today’s technology provide. "You are graduating in a time of unprecedented technology, globalization and commerce, and the ability to express yourself and your ideas and pursuits like no other time before. I say this to all of my students, and I will say it to you today again: You are so lucky to be starting your path with so much before you."

Martin joined Coastal Carolina University's Department of Politics and Geography in 1999. She received her Ph.D. from the University of Maryland, College Park and was awarded a Fulbright Scholar grant to do research and teach at La Universidad San Francisco de Quito, Ecuador in 2009. Her research and writing focus on global environmental politics, energy, sustainable development, and international relations and policy.

She has written and edited numerous books and articles in her field, including "Ending the Fossil Fuel Era, Oil in the Soil: The Politics of Paying to Preserve the Amazon" and "Introduction to World Politics: Conflict and Consensus on a Small Planet," written in collaboration with retired CCU professor Richard Oliver Collin.

She has worked closely on international collaborations with Ecuador and has written extensively about oil extraction in the Amazon and on the Galapagos Islands. She has directed CCU's Model U.N. team for 12 years. She was the 2015 recipient of the HTC Distinguished Teacher-Scholar Award. She also has directed a new sustainable development program at CCU in which students produce digital case studies of local sustainability issues and challenges.