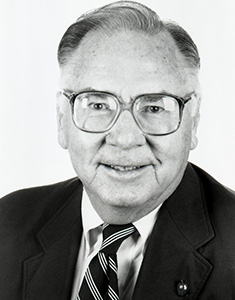 Philip H. Prince was born in Bostic, N.C. in 1926. He received a bachelor's degree in arts and sciences from Clemson University in 1949. Prince was co-captain of the football team that won the Gator Bowl in 1949. His education at Clemson University as a scholar-athlete was interrupted by service in the United States Army from 1944 to 1945.

He attended Columbia University-NYC School of General Studies in 1949 and did graduate work at Kings College in Bristol, Tennessee, until he was called back to service in the Army in 1950. He is a 1968 graduate of the executive program at the University of North Carolina at Chapel Hill.

Prince worked for Milliken Company in various management and executive positions from 1951 to 1967, including service as vice president of the firm. In 1978, he was named senior vice president of American Express Company, and in 1983 he accepted a similar position with Synco Properties, Inc., in Charlotte; he retired in 1985.

Prince served as the 12th president of Clemson University in 1994 and 1995. When he assumed the presidency, Clemson was in the early stages of major restructuring, dealing with declining budgets, and searching for a permanent president. He accepted the post with two conditions: he would forfeit his seat as a life trustee to avoid an appearance of a conflict of interest, and that his salary be contributed to the Clemson University Foundation as a charitable gift. The South Carolina General Assembly recognized Prince for his distinguished service to Clemson and South Carolina in a concurrent resolution in 1995.

His service to Clemson University includes serving on the Board of Trustees, as chairman of the Campaign for Clemson, and president of the Clemson University Foundation Board of Directors. For his leadership and enduring service to Clemson, he received the Alumni Association Distinguished Service Award, the President's Award, and the Clemson Medallion, the institution's highest public honor. In May 1995, Clemson awarded him with the honorary degree Doctor of Humanities. In 1999, the Clemson University Alumni Association created the Prince Scholars, an unrestricted scholarship program, to honor the service of the 12th president and his wife, the late Celeste Prince.

Prince was awarded the honorary degree Doctor of Public Service from Coastal Carolina University during the May 1995 commencement ceremony.