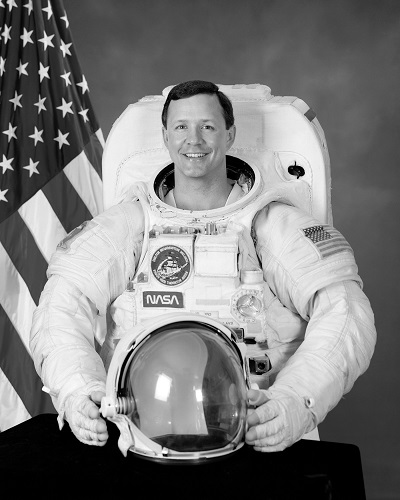 Pierre J. Thuot, a former NASA astronaut, logged more than 650 hours in space, including 17 hours on three space walks. He flew as a mission specialist on the space shuttle Atlantis in 1990, on the maiden voyage of Endeavour in 1992 and on the Columbia in 1994.

Thuot joined NASA in June 1985. His Atlantis mission orbited the Earth 72 times in 106 hours and traveled 1.87 million miles. On Endeavour, Thuot participated in three space walks and broke a 20-year record for the longest space walk. On the Columbia, more than 60 experiments or investigations were conducted in many scientific and engineering disciplines including materials science, human physiology, biotechnology, robotics and atmospheric ozone monitoring. The 5.8 million-mile mission concluded on March 18, 1994, after orbiting the Earth 224 times in 13 days.

Prior to his NASA service, Thuot was a test flight officer who flew more than 50 different aircraft. He retired from the Navy in 1998 and is currently manager of Aerospace Programs Assessments at Whitney Bradley.

Thuot urged graduates to "reach for the stars," embracing the core values – integrity, commitment, accountability, respect and excellence – that will help them to have happy and successful lives and careers. "Dare to have dreams," he said. "Appreciate the help and encouragement of others, but realize that you alone will do the work that will enable you to realize your dreams."

Thuot was awarded the honorary degree Doctor of Public Service from Coastal Carolina University during the commencement ceremony.