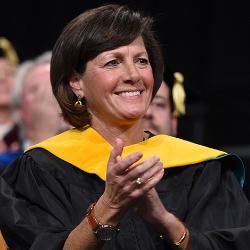 ‌At age 29, Susan O'Malley became the first female president of an NBA franchise as well as one of the first women in a major front-office position in major league sports. She is the former president of the NBA's Washington Bullets (now the Wizards) and Washington Sports and Entertainment. In her 20-year tenure with Washington Sports, she also ran the Verizon Center (formerly the MCI Center), the WNBA's Washington Mystics, and Ticketmaster Washington-Baltimore. By the time she retired in 2007, the Verizon Center had recorded more than 21.2 million patrons. She earned a juris doctorate from the Georgetown University Law Center and a bachelor's degree in marketing from Mount St. Mary’s University in Emmitsburg, Md.

If you follow your passion, you’ll find your purpose.”

As the December 2016 commencement speaker, O’Malley advised the graduates to follow their passions. “If you follow your passion, you’ll find your purpose,” said O’Malley. “When I became president of the Washington Bullets on May 9, 1991, I knew that I had opened the door for other women to become executives in sports. . . . So at that point in time I knew my purpose.”

She has been a speaker at the 2015 and 2016 Women's Leadership Conference and Celebration of Inspiring Women, the signature event of Women in Philanthropy and Leadership for Coastal Carolina University.

O'Malley was awarded the honorary degree Doctor of Science from Coastal Carolina University during the December 2016 commencement ceremony.