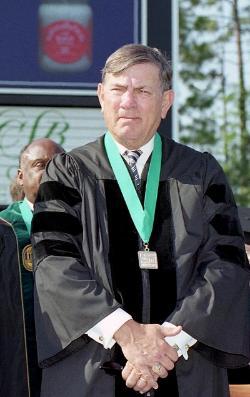 A resident of Surfside Beach, Thomas G. Keegan represented District 106 (Horry County) in the South Carolina House of Representatives from 1989 to 2005; he was elected to serve eight two-year terms.

Since moving to Horry County, Keegan has been actively involved in higher education as a former member of the Francis Marion University Board of Trustees and an advocate of Coastal Carolina as a community member and as chair of the Ways and Means Committee’s Higher Education Subcommittee. His public service commitments extend to the Grand Strand Area Transportation Committee, the Conway Historical Society, the Waccamaw Regional Planning and Development Council, and the House Tourism Caucus.

Keegan is a graduate of Iona College and a retired chief of police. He was born on April 3, 1939, in Greenwich, Conn.

In 2004, Keegan was awarded the Order of the Palmetto, the state's highest civilian award, for his service and contributions to the state of South Carolina.

He was awarded the honorary degree Doctor of Public Service from Coastal Carolina University during the May 2004 commencement ceremony.