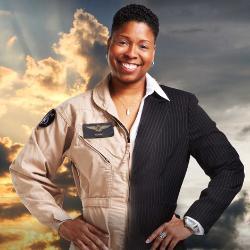 Earning her wings in July 2001, she graduated number one in her class to became the Marine Corps' first African-American female pilot. In March 2003, she flew with HMLA-169 during the invasion of Iraq as the nation's first African-American female combat pilot. Leaving the Marine Corps in June 2007 after completing two tours of duty in Iraq, Armour launched her company, VAI Consulting and Training LLC.

In 1993, while a student at Middle Tennessee State University, she enlisted in the Army Reserves and later the Army ROTC. After graduating in 1997, she became the first African-American female to serve as a police officer in Tempe, Ariz., before joining the United States Marines in October 1998.

Armour has appeared on Oprah Winfrey, CNN, NPR and other news outlets. She is the author of the book, Zero to Breakthrough: The 7-Step, Battle-Tested Method for Accomplishing Goals that Matter. She is known around the world simply as "Flygirl."

She was a keynote speaker at the 2012 Women's Leadership Conference and Celebration of Inspiring Women, hosted by Women in Philanthropy and Leadership for Coastal Carolina University.

She urged December 2013 graduates to be willing to make sacrifices to achieve their goals. She described the obstacles she faced as a black woman in the military and as an entrepreneur. "Acknowledge the obstacles, but don't give them power," she said. "Coastal Carolina University is your gateway to the American dream. So many people are depending on you to succeed."