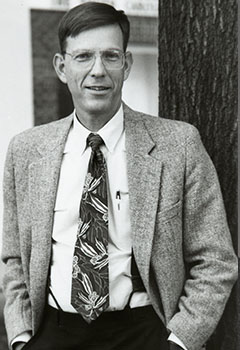 He earned a bachelor's degree in history from Davidson College in 1965, and a master's degree and Ph.D., both in history, from the University of South Carolina, in 1967 and 1969, respectively. After two years in the U.S. Army, including a tour of duty in Vietnam, he returned to USC as a post-doctoral fellow of the National Archives. Edgar joined the USC faculty in 1972, and was named director of the Institute for Southern Studies in 1980 and the Claude Neuffer Professor of History and in 1995. He retired from teaching in 2012, after 40 years of teaching and research. Edgar was born in Mobile, Alabama.

He has been active in community organizations and has served on the boards of the South Caroliniana Society, the Historic Columbia Foundation and the Columbia Museum of Art. In 1998, he was awarded the Order of the Palmetto, the highest award presented to a South Carolinian for achievement and service.

In his address, Edgar asked the graduates to consider their place in history as the first graduating class of the millennium. He described South Carolina's progress in cultural, racial and social issues during the past generation and praised his fellow honorary degree recipients, author and environmental activist Genevieve Chandler Peterkin and musician Bill Pinkney for their work, "a rich legacy in story and song, words and music."

Edgar was awarded the honorary degree Doctor of Humane Letters from Coastal Carolina University during the May 2001 commencement ceremony.