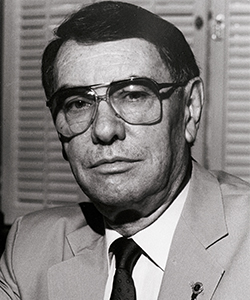 William F. "Bill" Davis (1914-2000) served the cause of education in Horry County in many capacities during his long career and played a major role in the establishment and development of Coastal Carolina University.

Born in Kings Creek, S.C. in 1914, Davis was educated in the public schools of Horry County and at the University of South Carolina.

He served on the Horry County Board of Education for 29 years, and was chairman for 28 years, from 1954 to 1982. He was involved in early discussions and decisions about establishing a local college in Horry County and was among the group of men who formed the first board of directors for Coastal Carolina Junior College in 1954. He served on the board of what would become the Coastal Educational Foundation until 1956. Davis was active in obtaining financial support for the first building on campus – the Edward M. Singleton Building – which opened in 1963. He was a member of the Horry County Higher Education Commission from 1986 until his death in 2000.

Davis was recognized as an original founder of Coastal Carolina University during the institution's first Founders Day ceremony, held March 16, 1987.

He was a management consultant for Holliday Associates and Blackwater Corporation, and was later recognized with the Holliday Appreciation Award for 60 years of service. He received the South Carolina School Board Association Distinguished Service Award and the Conway Chamber of Commerce Lifetime Achievement Award, and was named Aynor Area Citizen of the Year. He was president and vice president of the Horry County Farm Bureau, and served on the boards for the Conway Hospital Foundation and First Citizens Bank, and was a member of the United Methodist College Board of Higher Education.

Davis was awarded the honorary degree Doctor of Public Service from Coastal Carolina University during the May 1997 commencement ceremony.