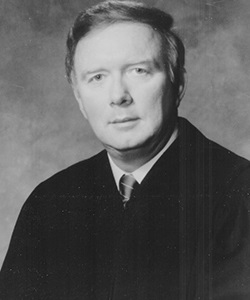 U.S. Chief Judge of the Fourth Circuit Court of Appeals William W. Wilkins was appointed to the U.S. District Court of South Carolina in 1981. In 1986, President Ronald Reagan nominated Wilkins to a seat on the United States Court of Appeals for the Fourth Circuit. He was the first federal judge in the nation appointed by Reagan. Since 2003 he has served as chief judge for the five-state area that includes South Carolina. He has served on the federal court for 25 years.

Wilkins is a graduate of Davidson College and the University of South Carolina School of Law. He was the first solicitor elected in South Carolina on the Republican ticket since Reconstruction; he was also the youngest solicitor in the state at that time.

Wilkins urged graduates to consider careers in the public sector. "There is so much good that you can accomplish," said Wilkins. "Seize every opportunity to do more good things that will live beyond our years."

Wilkins was awarded the honorary degree Doctor of Public Service from Coastal Carolina University during the commencement ceremony.