Chanticleers and their fans across the nation remember the exciting weekend in December 2020 when ESPN’s College GameDay rolled onto the Coastal Carolina University campus to broadcast its live national pregame show leading up to the Top 20 matchup between CCU and Brigham Young University. However, only a handful are aware of the CCU senior who was stationed just to the left of the ESPN cameras. Joseph “Reid” Hamilton served that day as a runner, assisting, interacting, and observing up close the full production of a major television operation. For Hamilton, the real action happened not on the field, but on the set, and he was right in the middle of it.

“It was absolutely a phenomenal experience,” said Hamilton. “I was able to see firsthand how a show is produced: how they plan for it and how it’s executed.” 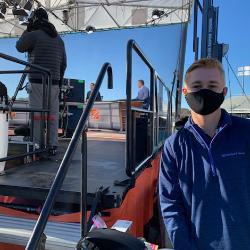 ESPN GameDay recruits select broadcasting students at destination college campuses across the country each week of its programming, offering them direct access to the logistics and production while the student assists in hospitality-related tasks. Because of the spontaneous nature of CCU’s selection for College GameDay, Hamilton became aware of the opportunity just days before the game, and his nimbleness secured him the spot. On the recommendation of his adviser, Lindsey Hanks, Hamilton contacted the production team on Tuesday, Dec. 1; he was interviewed and selected on Wednesday, and he showed up to work at CCU’s Brooks Stadium on Friday at 8 a.m.

The role served as a progressive step in Hamilton’s academic career. As a communication major with a concentration in interactive journalism and a minor in creative writing, Hamilton has worked as an intern and hosts Teal Nation News with CCU radio station WCCU. A look inside the ESPN machine was a milestone along Hamilton’s journey toward his goal of becoming a nightly television news anchor.

“I was able to meet and talk to Reece Davis, Kirk Herbstreit, and Desmond Howard [host and analysts, respectively],” said Hamilton, “and I had a really good conversation with ESPN reporter Maria Taylor. It was amazing, and they were so very nice.”

These interactions were much more than mere celebrity sightings. Shay Sinnott, ESPN operations assistant and Hamilton’s supervisor for GameDay, said the runner role can have significant impacts for college students. In fact, Sinnott herself started her career with ESPN as a runner 11 years ago, when she was a college freshman.

"It is really comforting to know that Coastal is preparing their students to make it in the big leagues."

“It is such a good foot in the door,” said Sinnott. “Becoming a runner is the first step to getting in with a place like ESPN or any network. When you do a good job, 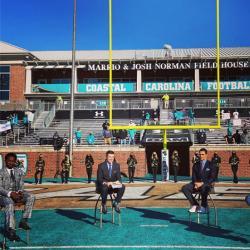 they call you back, and your name gets passed around from show to show and game to game. That’s the recipe for success.”

Even better, Hamilton established himself as responsible, flexible, and motivated, traits that will be remembered among ESPN employers.

“Reid was fantastic,” said Sinnott. “He came in with the right attitude: easy to get along with, willing to try anything, being present, looking for any opportunity, and asking for advice on things. You can tell he’s taking it seriously for his future career. We’ll definitely be looking forward to calling Reid when we’re back in the area again.”

Sinnott and Hamilton were mutually gratified to learn that Hamilton’s CCU coursework had prepared him perfectly for the opportunity. “I had just finished broadcast journalism with [CCU lecturer] Sharon Tutrone,” said Hamilton, “and all of the projects, the rundown, the scripts that we wrote, everything that goes into executing a show properly, I got to see in those two days all come into play and how it’s executed and presented live on television.” 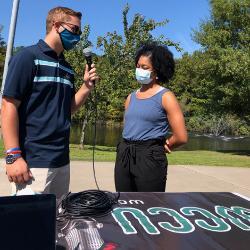 For her part, Sinnott was impressed with the precision of Hamilton’s knowledge.

“We were so excited to work with Reid as someone that’s studying television right now,” said Sinnott. “He was familiar with all the terminology, and at the end we gave him a copy of the rundown we actually use on-site that was a breakdown of the entire show. He was so excited to see that, and to hear him say, ‘This is exactly what we do in our classes,’ was great. It was really comforting to know that Coastal is preparing their students to make it in the big leagues.”

Another moment that will stay with Hamilton came from a conversation with ESPN camera operator Dennis Hernandez.

“He told me, ‘Don’t let anyone tell you that you can’t make it or do what you want to do, because one day all four of these guys up here will need to be replaced,’” recalled Hamilton. “’Everyone thinks that you have to play football in order to be an anchor on a College GameDay show or NFL network, but that’s not the case anymore. If you have the talent, you’re good in front of the camera, and that’s your passion, you can most certainly do it.’”

With his connections, inside scoop, and inspiration straight from ESPN professionals, Hamilton gained more than a morning of excitement from College GameDay. Stay tuned.