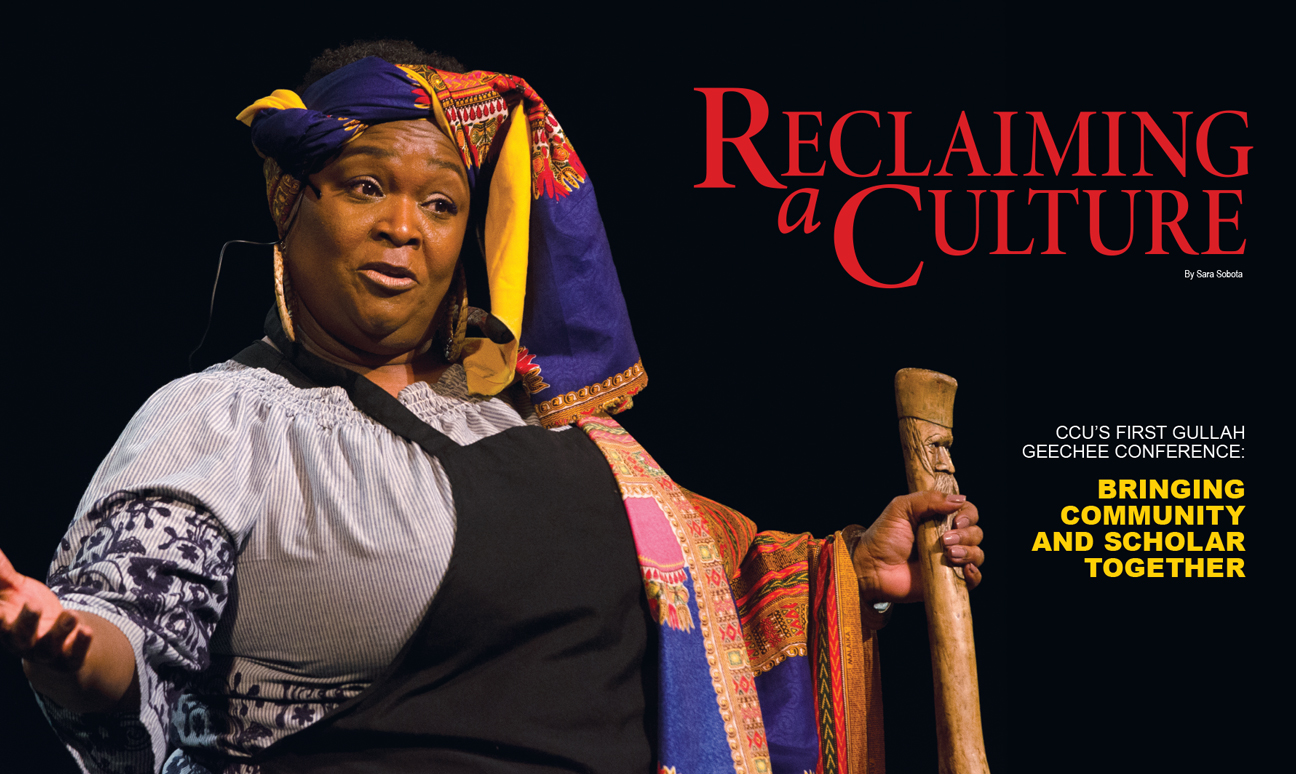 Academic and community forces united on the Coastal Carolina University campus this spring to explore and celebrate the ways African culture permeates global civilization, with an emphasis on connection, documentation and discovery.

In a foundational, interdisciplinary move, CCU held the region’s inaugural Gullah Geechee and African Diaspora Conference in March 2019, bringing 95 international scholars from Ghana, Senegal, Barbados, Sierra Leone and around the United States to present, perform and interact with practitioners and local keepers of the Gullah Geechee culture.

“It’s a dream come true to have you all here with us,” said Crawford as he addressed a crowd of African diaspora scholars and community members at the conference keynote event. 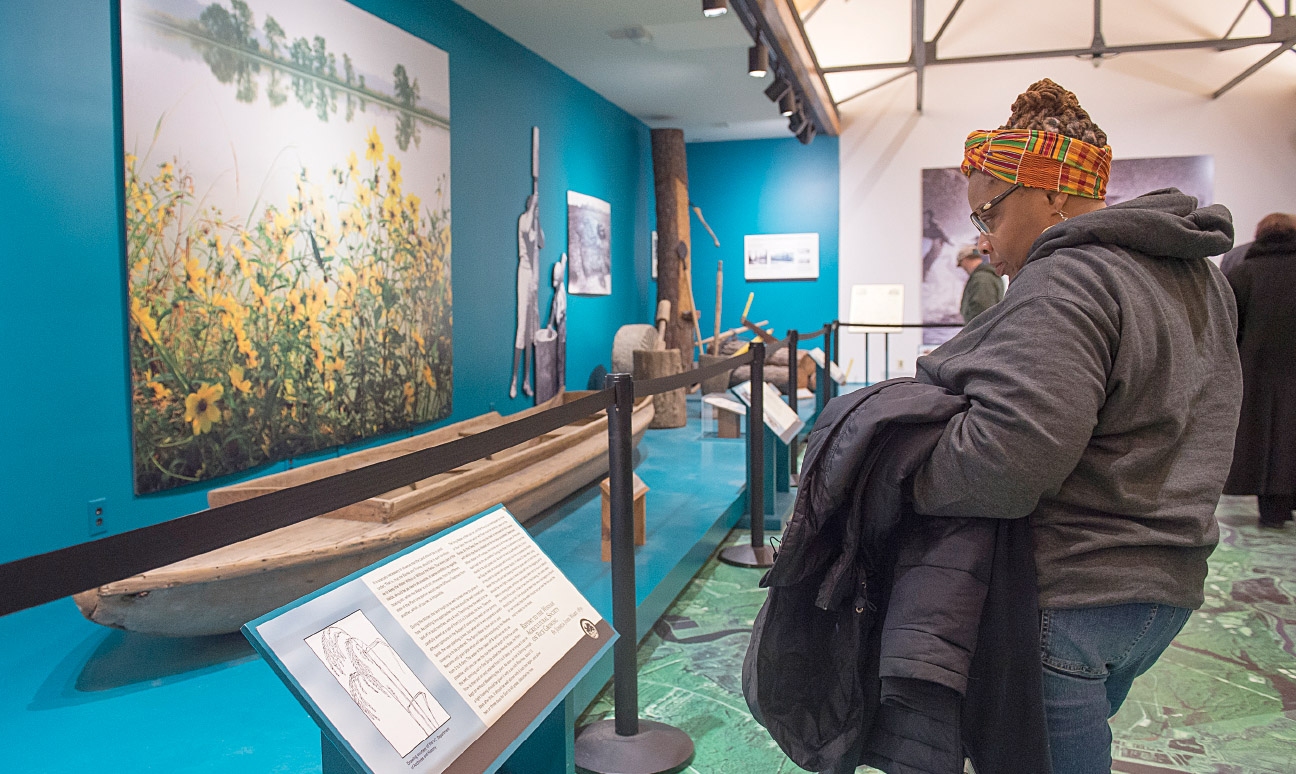 Visitors experience a tour of the Gullah Geechee Gaardin (Garden) and exhibit at Brookgreen Gardens in Murrells Inlet, S.C., on the opening night of the conference.

The African diaspora is the mass dispersion of people that occurred during the transatlantic slave trades from the 1500s to the 1800s, which scattered people of African descent to areas throughout the Americas and the Caribbean. African diaspora studies is concerned with how African culture moved, endured and evolved over the centuries in numerous disparate and far-flung areas. Gullah Geechee is one subset of the African diaspora that culturally connects people living in the Atlantic Sea Islands and coastal areas from northern Florida to North Carolina to their ancestors and relations in Sierra Leone. The late Charles Joyner, Distinguished Professor Emeritus of Southern History and Culture at CCU, wrote the pioneering work Down by the River: A South Carolina Slave Community (1984), one of the first academic texts to document Gullah Geechee culture. Fittingly, the Joyner Institute was established in 2016 to honor his work and to continue his legacy. The conference was a milestone in CCU’s mission to achieve that goal.

The Gullah Geechee Cultural Heritage Corridor Commission (GGCHCC), a federal National Heritage area established by the U.S. Congress in 2006 to recognize the unique culture of Gullah Geechee people, partnered with CCU and the Joyner Institute to present the conference.

The event broke tradition with the typical academic conference, in which scholarly experts present their research and findings to a group of highly specialized peers. A key goal of this gathering was to make materials and information accessible to the general public and the communities from which the culture emerged. In addition, many events were free and open to the public.

“Too often,” said Crawford, “scholars focus either entirely on archives and never go down and apply it to the actual people, or, they’ll study people and write a book, and the group to whom it applies never sees it. Here’s where we connect the scholarship to the actual people. If we’re going to discuss the Gullah Geechee people, they should be here, and they should understand what we’re saying and the research we’ve conducted. The goal is to join together. That partnership is very important.”

The event kicked off at Brookgreen Gardens with an opening presentation by Ron Daise, Brookgreen’s vice president for creative education, and a performance by Marlena Smalls and the Hallelujah Singers. Conference highlights included a spoken-word poetry reading by Marcus Amaker, Charleston’s first poet laureate and award-winning graphic designer; a Salute to Gullah, featuring the Gullah Geechee Ring Shouters, all descendants of African slaves who perform one of the oldest surviving African artistic traditions; and Aunt Pearlie Sue, a creation of Anita Singleton-Prather, a native of the Sea Islands in Beaufort County, S.C., who based the character on her grandmother and entertains audiences with Gullah-inspired folktales. 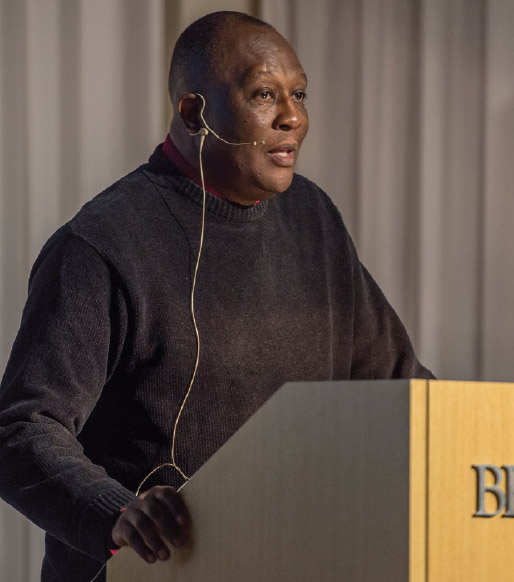 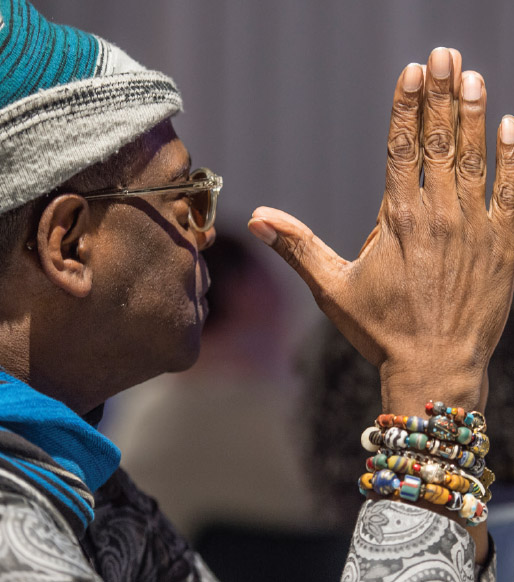 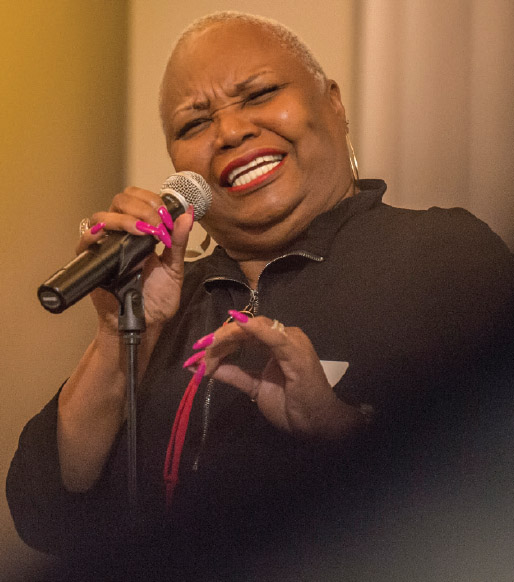 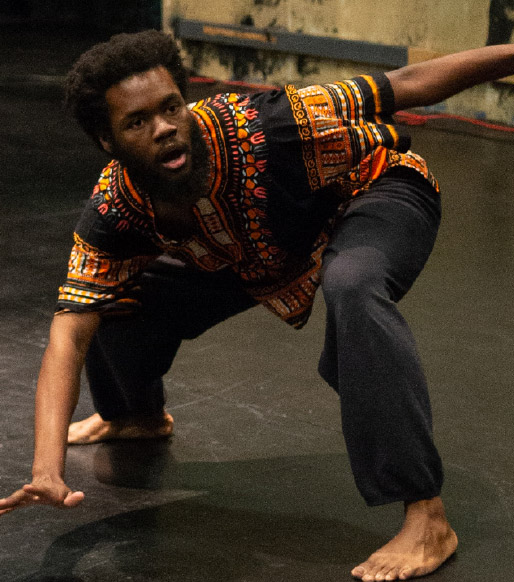 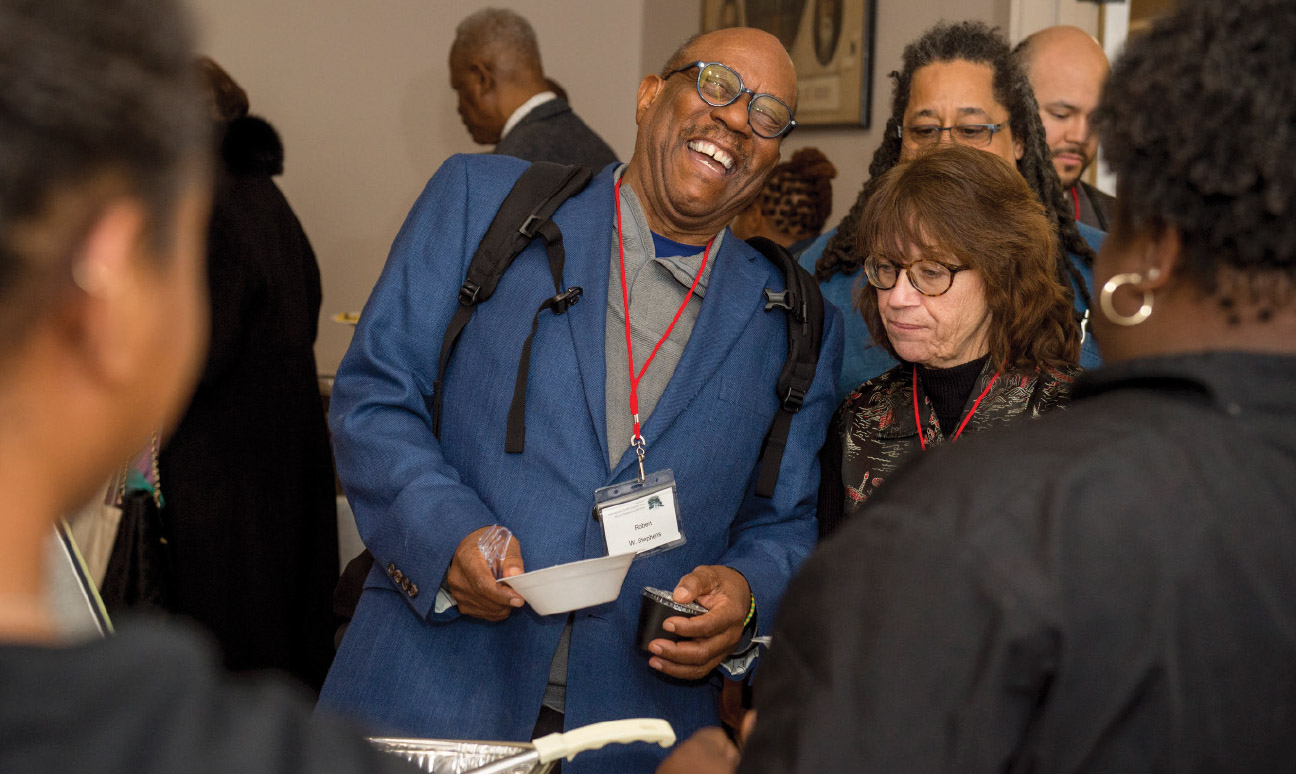 Guests including Robert Stephens (center) enjoy a Taste of Gullah in Conway at the Horry County Museum.

VOICES FROM THE PAST

A repatriation program, an element of the conference that underwent a last-minute change in venue due to anticipated audience interest, embodied the goal to bring groups together. The event involved the recordings of John Lomax, who traveled to Murrells Inlet in the 1930s on a Works Progress Administration (WPA) project to gather narratives and recordings of former slaves. He recorded, among other things, the singing of Lillie Knox, who was the housekeeper of Genevieve Chandler, and of her cousin Zackie Knox. Lillie sang a piece titled “I’m Troubled All about My Soul,” which was later released, widely distributed, commonly re-recorded, and became the inspiration for James Baldwin’s work If Beale Street Could Talk. The recordings are housed in the American Folklife Center in the Library of Congress, and Lomax became renowned for his recordings.

However, descendants of the Knox family were never made aware of the recordings; they had no idea their grandmother’s voice was a familiar sound to millions of listeners. At the CCU conference, representatives from the Library of Congress joined Anna Lomax Wood, president of the Association for Cultural Equity and granddaughter of John Lomax, in presenting the recordings to Lillie Knox, granddaughter of the original artist.

“The people who created the culture need to have the material in their hands and be able to access it without any problems,” said Wood, “and to be aware of the possibilities of what can be done with it.”

Knox, who had cried the first time she heard her grandmother’s voice in the recording, accepted the gift on her family’s behalf.

“It’s an honor to have representatives from the federal government here to celebrate, to share knowledge and to listen to the work of our ancestors,” Knox said. 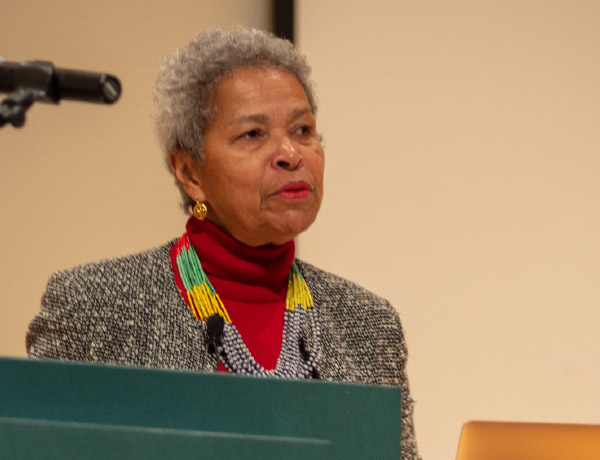 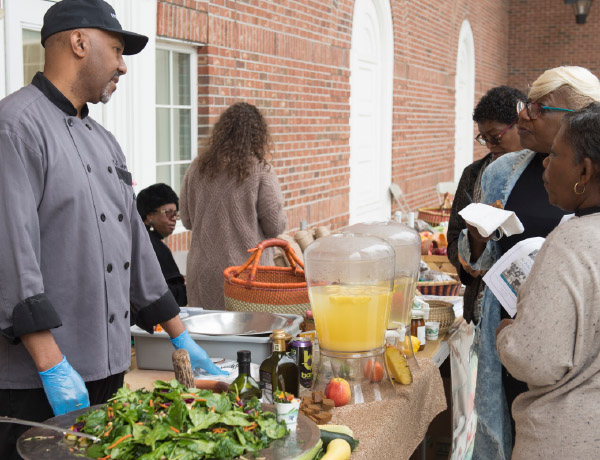 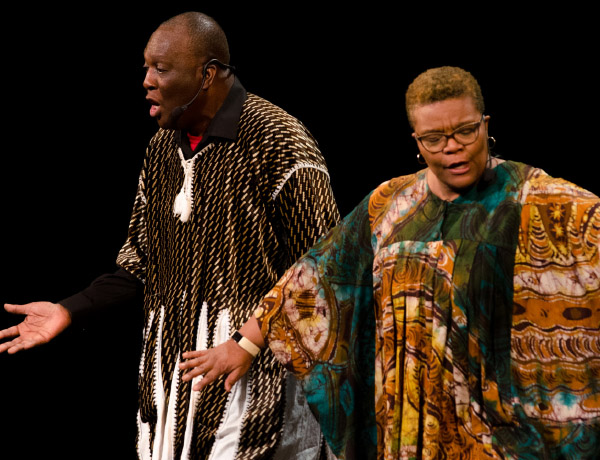 Ron and Natalie Daise perform in a "Musical Salute to Gullah." 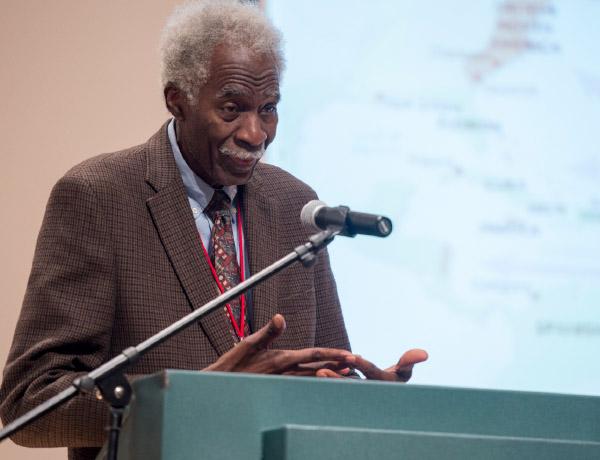 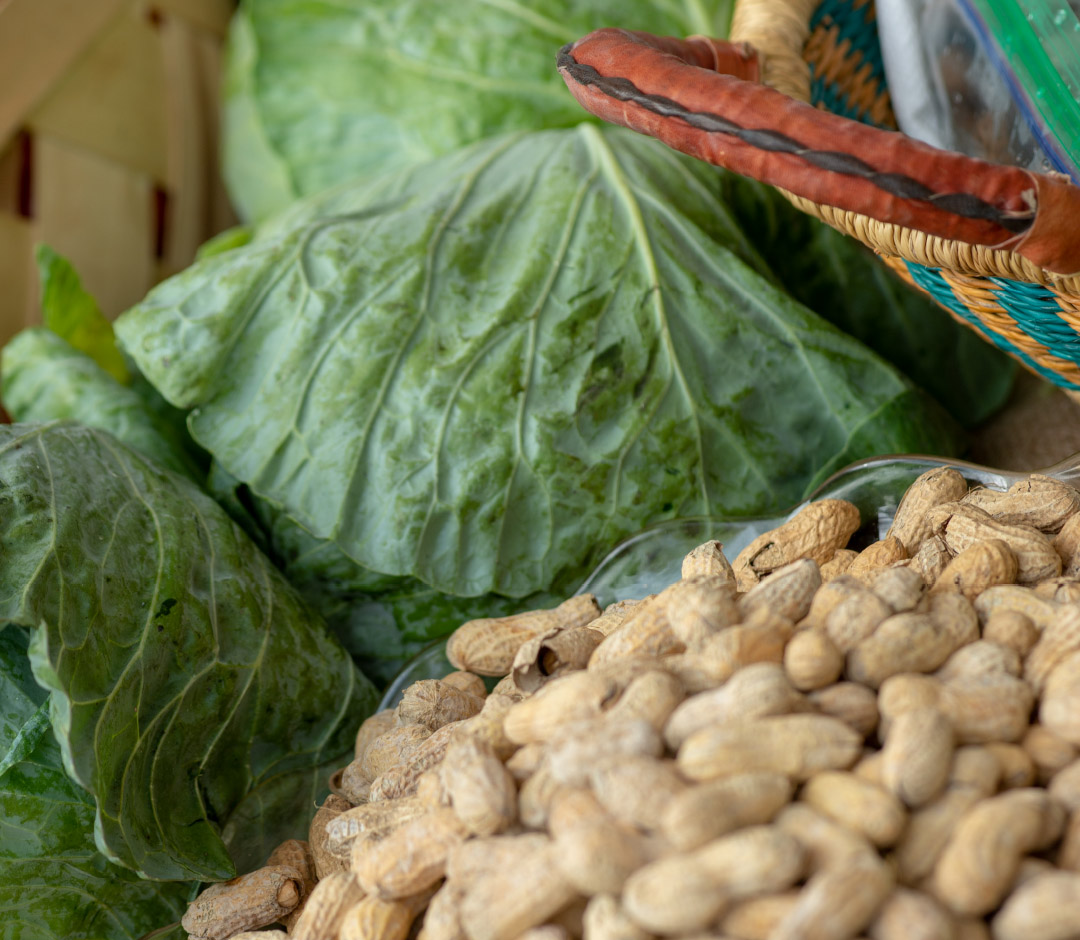 Other conference sessions involved sharing research in various diaspora-related fields throughout the globe. They included a Gullah Geechee film festival; a presentation about emerging educational programming; papers on iconic cultural elements such as praise houses; arts such as cloth and textiles; and studies of African diasporan culture throughout Brazil, Puerto Rico and Bolivia. Dramatic and musical performances and visual arts presentations, as well as a Taste of Gullah dining event at the Horry County Museum in Conway, rounded out the offerings.

After a trio of presentations by Layla Brown-Vincent of the University of Massachusetts Boston; D.J. Polite of the University of South Carolina; and Precious D. Lovell of North Carolina State University in a session titled “Latin American Expressions of Blackness,” art historian Anne Bouie commented on how the session reflected the goals of the conference as a whole. 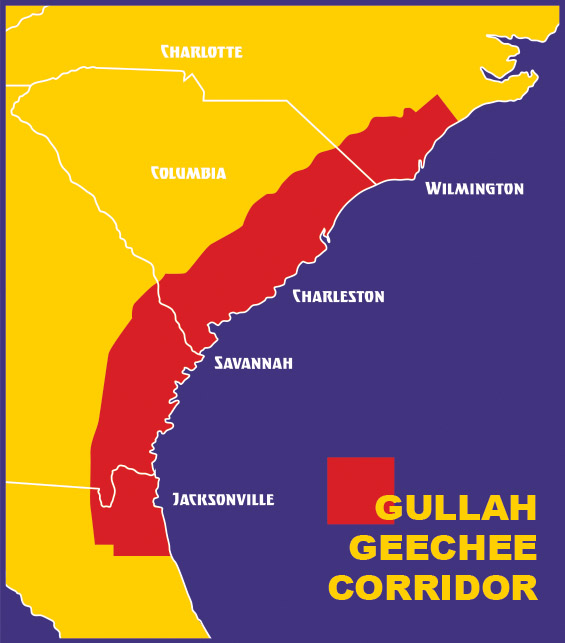 “The content I’ve seen is representative of the conference effort to do a synthesis of academic work and application of academic work,” Bouie said. “Polite’s presentation was indicative of placing a political act in an academic and social context, which makes academia come out of the silos a little bit and into the real world, and it makes the real world legitimately accepted in an academic context. These papers hit all of my buttons: the academic button, the research button, the cultural relevancy, revisionist and alternative use of academic research and the cultural context.”

In her keynote address, Sheila Walker, cultural anthropologist, filmmaker and executive director of the nonprofit organization Afrodiaspora Inc., offered a sense of global scope of the diaspora, pointing out that between the years 1500 to 1800, 6.5 million people settled in the modern Americas. Of that number, 5.5 million were African and 1 million were European.

The body of Gullah Geechee culture began here, but explore the legs, and we see echoes of the same kind of cultural phenomenon elsewhere in the African diaspora.”

Author, journalist and GGCHCC member Herbert Frazier has facilitated a wide array of connections between Gullah and African people spanning time and geography using cultural connectors. His forthcoming book, Crossing the Sea on a Sacred Song, tells the story of a Mende funeral song that connects Mary Moran in Georgia with Baindu Jabati in Sierra Leone.

“Up and down the corridor, from Waccamaw, Johns Island, James Island, Sapelo, Darien, all of these communities, they don’t know what we have learned about their own culture and their ancestors,” said Frazier. “So I think it’s important that academicians take their research and go back to the community to inform the community what they found. People are coming to celebrate the culture more than they did generations ago, but there are still pockets in rural areas where people don’t understand, and if they do, they don’t appreciate it. I think it’s important to inform the community, which is part of what we’re doing here, so they can build not only an appreciation but also a respect, and in turn, hopefully they’ll tell their kids about the culture, and that will help in the preservation of the culture.” 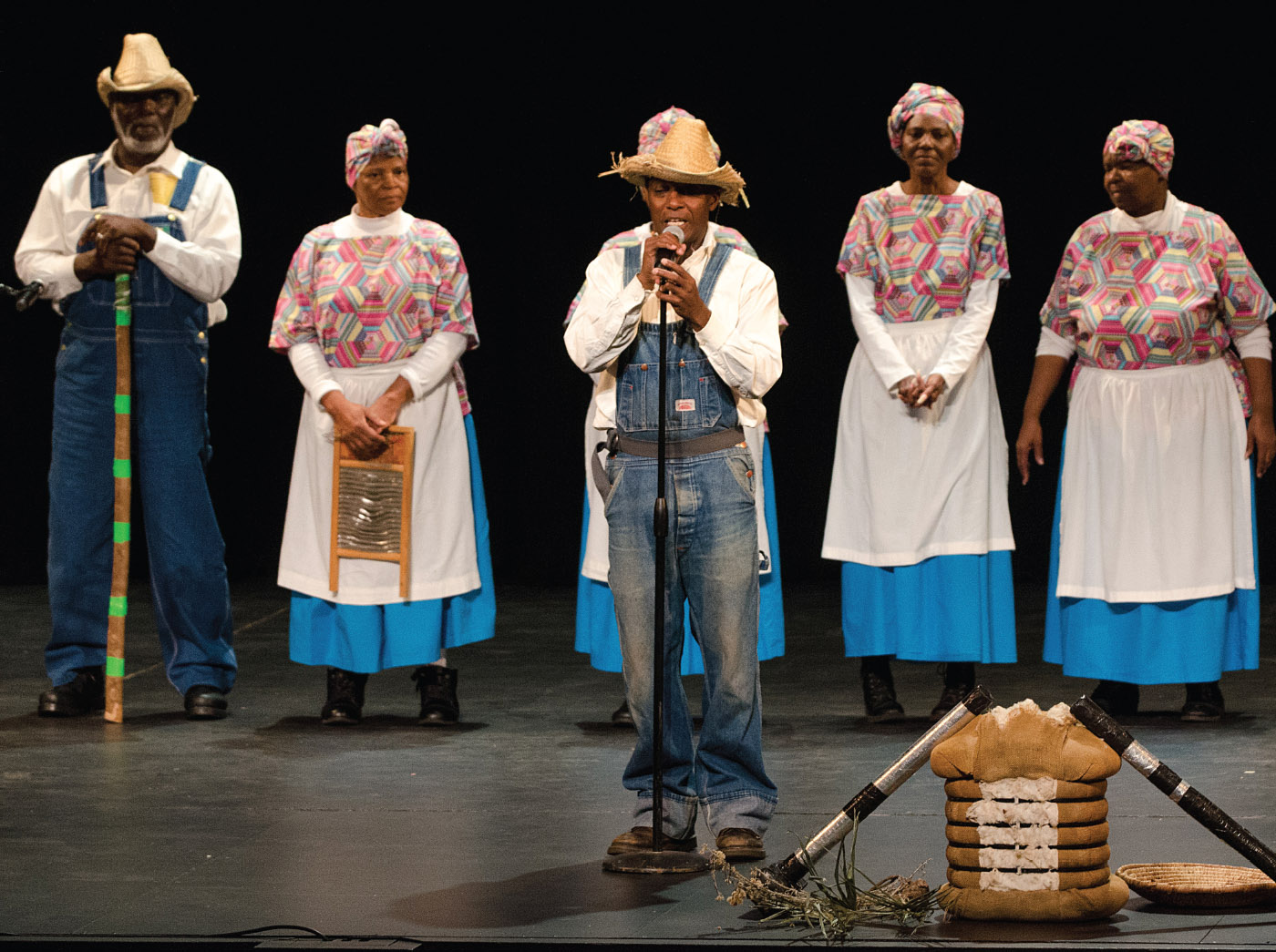 Crawford said CCU and GGCHCC plan to hold biennial conferences in the future at various locations throughout the Gullah Geechee corridor.

Heather Hodges, executive director of the GGCHCC, said she hopes the conference is a model for more collaboration and additional programming in educational and governmental institutions throughout the region.

“One of the benefits of having this conference is that it brings to the surface all of the researchers and all the community members who are part of this project and results in a better understanding and documenting of Gullah Geechee cultural history,” said Hodges. “And we will use that program to make the case to other conferences and other universities why they should be doing similar things.” 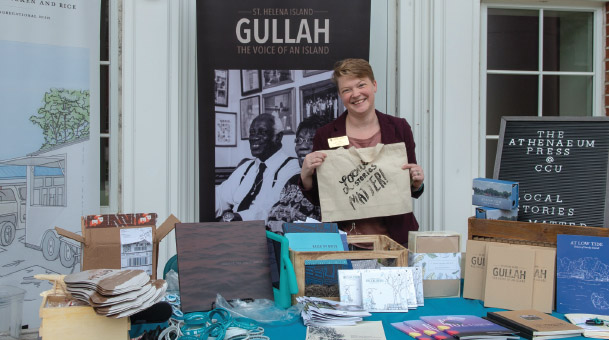 A $270,327 grant from the National Archives and Records Administration will fund a unique project making Gullah historical records available to the public.

The recipients of the grant—Eric Crawford, director of CCU’s Charles Joyner Institute for Gullah and African Diaspora Studies, and Alli Crandell, director of the Athenaeum Press and digital initiatives for the Edwards College—say that the Gullah Geechee Digital Project (GDDP) will create the first finding guide for a broad range of historical material related to Gullah Geechee culture.

The GDDP will provide digital access to archival collections including Negro spirituals, film, oral histories, and historic documents from three prominent Gullah Geechee areas in South Carolina, each of which made remarkable achievements during the Jim Crow era in civil rights, education and voting representation: Sandy Island, Johns Island and St. Helena Island.

“Currently there is not a singular resource for these materials across institutions,” said Crandell.

CCU will partner with the Library of Congress, the South Carolina Historical Society and the Association for Cultural Equity in the project, serving as the hub in facilitating digitalization.

Goals for the digitized materials include engagement with university students and cultural experts; introduction to the public and K-12 school curriculum; and repatriation to their Gullah Geechee communities of origin. Ultimately, the project is designed to advance current efforts to preserve a way of life that is quickly disappearing.