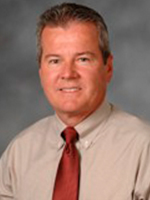 David Frost joined Coastal Carolina University in February 2018 as vice president of finance and CFO. His positioned to transitioned to senior vice president in 2019. Previously, he served as the compliance and planned giving officer then director of finance for the Coastal Educational Foundation from 2012-2018.

Before joining CCU he was the vice president of finance and CFO for Waccamaw Corporation. He began his career with Waccamaw Pottery as a staff accountant and held various positions over 20 years such as accounting manager, assistant controller, retail controller, corporate controller and CFO.

Frost has been married to the former Gloria Prince of Conway for more than 36 years. They have three children and two grandchildren.